A Guide to Primary Resources in the Alaska & Polar Regions Collections, University of Alaska Fairbanks

The Movement towards Alaska's Statehood

A Guide to Primary Resources in the Alaska & Polar Regions Collections, University of Alaska Fairbanks 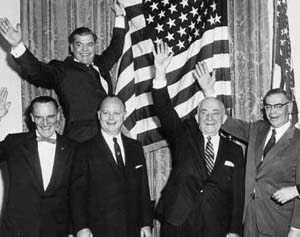 Delegation celebrates Alaska's Statehood by posing in front of a 49 star flag. Identified are Representative Ralph Rivers (far left), Ernest Gruening (beneath flag) and Bob Bartlett (next to Gruening in light colored suit).

In commemoration of the 50th anniversary of Alaska's admission into the Union, the Alaska & Polar Regions Collections (APR), with funding from the Alaska Humanities Forum, has published this bibliography as an attempt to familiarize researchers with the primary resources available in APR collections pertaining to the statehood movement. These materials were created by the people who were directly involved. Examples include committee reports and notes from a Constitutional Convention delegate, or a television broadcast of a debate about the need for Alaskan statehood, correspondence of the Alaskan delegates to Congress, political cartoons depicting the Alaskan plight, and recorded interviews with those who played key roles in the struggle. It is our hope that this guide will help the stories of Alaskan statehood be told…and retold. 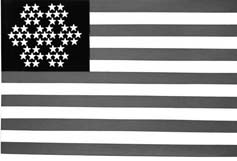 Image of what may have been an alternate version of the 49-star flag after the statehood of Alaska.

These manuscript collections may be viewed in the Research Room of the Alaska and Polar Regions Collections in the Rasmuson Library. Access is limited to research room hours.

Delegates to the Alaskan Constitutional Convention view a musk ox at the University of Alaska Musk Ox Farm during the 10 anniversary celebration of the signing of the states constitution. WILLIAM A. EGAN PAPERS, 1940-1984, UAF-1985-120-266

These collections are housed at other institutions but researchers can access microfilmed copies in the APR Alaska Microfilm Collection. See the library catalog, for call numbers.

Oral histories can be checked out through the Oral History Office located in the APR Research Room, the Rasmuson Library circulation desk, or through interlibrary loan. Call numbers have been provided for each tape.

These videorecordings are located in the Alaska Film Archives in the Rasmuson Library. Copies are available for check out at the Library circulation desk. Call numbers have been provided with each film.