The new millennium brought many changes to the Rasmuson family. In 2000, they sold their majority interest in the National Bank of Alaska to Wells Fargo. At age 91, Elmer Rasmuson was just as savvy as ever and channeled his energies into the Rasmuson Foundation, a charitable organization created in 1955 by Jenny Rasmuson, his mother. The Foundation is the only private general grant-funding organization in Alaska. It supports living Alaskan artists, acquisitions for museum collections, provides sabbaticals for executive directors of Alaska non-profit agencies, and assists Alaskan organizations with specific goals. With all three of his children and Mary Louise on the Board of Trustees, EER brimmed with ideas on how to boost the foundation's endowment.

At the end of 2000, in December, Elmer Rasmuson died. He left behind a rich legacy for both his family and the state of Alaska. Throughout his life, Rasmuson enthusiastically supported intellectual pursuits and the cultural heritage of Alaska. In death, he was no less generous, bequeathing much of his estate to the Rasmuson Foundation and the University of Alaska. In that manner, Elmer Rasmuson assured himself that the family tradition of service to others would continue. 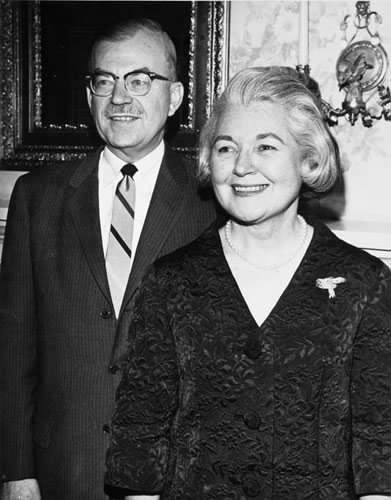