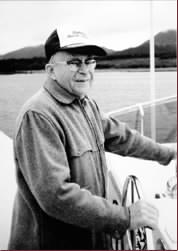 Elmer Edwin Rasmuson (1909-2000) was a lifelong Alaskan who enthusiastically supported the economic and cultural potential of both the people and the state of Alaska. He led a kaleidoscopic life. Rasmuson (EER) was a banker, Consul of Sweden and Mayor of Anchorage, campaigned for U.S. Senate (not elected), served on two fishery commissions, and was first chairperson of the Board of Trustees for the Alaska Permanent Fund Corporation. He also served on the Board of Regents of the University of Alaska for nineteen years, was largely responsible for funding the Rare Book and Map collection at Rasmuson Library, and contributed generously to the Anchorage Museum of History and Art as well as other civic and non-profit enterprises. At the end of his life, EER made yet another contribution to Alaska by bequeathing his personal papers to the Archives, Alaska and Polar Regions Collections, Rasmuson Library, University of Alaska Fairbanks.

The papers of Elmer E. Rasmuson provide an unparalleled look at the early economic history of modern Alaska as well as a record of an influential pioneer family. They reflect a central tenet of Elmer Rasmuson's life: that service to others is important. Since Rasmuson Library was named in honor of EER, it is fitting that the library presents this exhibition both to showcase a rich research source and to celebrate a life well-lived.

The University of Alaska Fairbanks is an AA/EO employer and educational institution and prohibits illegal discrimination against any individual: Learn more about UA's notice of nondiscrimination.